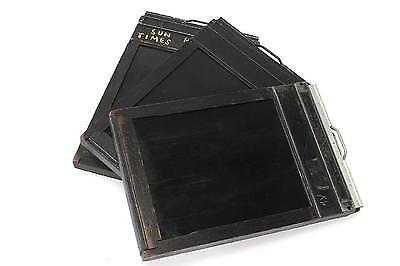 A 4x5 cut-film holder allows you to capture one shot or several images in one exposure. Using one of these devices, you can learn how to take large-format images, sandwich shots, and capture exposures that would otherwise be impossible with a DSLR, normal- or medium-format camera.

Film holders are made to hold one sheet of 4-inch-by-5-inch film. These holders contain a dark cover that slides above the film, protecting it from being exposed. When the film is ready to be exposed, the cover slides off. Once exposure is complete, the dark cover slides back into the holder, the holder is removed from the camera, and the film is ready for processing.

What are the different types of holders?

For 4x5 large-format film, vintage 4x5 film holders are available with plastic or wooden frames. Most wooden holders are made from double-sided walnut with metal latches. They load two sheets of film and are lightweight. Plastic holders have an inner frame wall designed at an angle. They also have a matte surface to keep reflections off. Both types of holders come with dark metal slides to keep light leaks out. Film holders are sold individually, in packages, or as bundles.

What is large-format film photography?

Large-format film photography uses film that measures 4 inches by 5 inches or larger to produce a clear, large image. Large-format films have a vast tonal range and sharpness. Photographers shooting with large-format film use cameras with bodies made from bellows. When a film holder is attached, the exposure is controlled via the bellows. The cameras accordion-shape bellows can be bent, tilted, or moved. As a result, large-format cameras allow diverse exposure movements that are not possible with digital cameras. Large

What other large-format films are there?How do you choose 4x5 sheet film?

Depending on your subject, 4x5 sheet film comes in three categories.