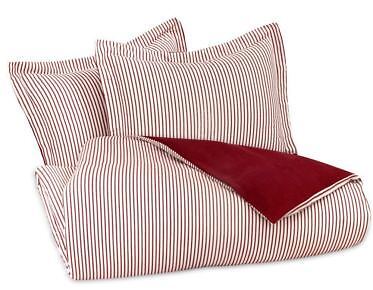 A duvet is similar to a quilt, except that it comes in two parts. The inside is a thick, comfortable pad used for warmth, and the outer part is a removable shell. One benefit of having a removable fitted shell is that it can be washed separately from the bedding inside.

What comes in a set?

A set will include the duvet cover, pillowcases, and extra cases called shams. The shams are larger than normal and match the duvet cover design. The set will also include a flat sheet and a fitted one. Some sets also add a coordinating bed skirt that sits on top of the box springs, under the mattress.

What kind of materials are the sets made of?

Sheets can be made of a cotton blend fabric or microfiber. One advantage of sets made with microfiber yarn is that they are hypoallergenic. This is an advantage in the nursery when it comes to blankets and other bedding. Pillow shams are sometimes made of linen or other high-quality fabrics since they are mostly for bed decoration.

Are duvet cover sets made for children or babies?

There are plenty of sets for kids and infants. You can find them in both solids and patterns and in every shade, from pastels for nursery bedding to bold colors for toddlers and older children. Baby bedding will often include a matching crib bumper, and the boys and girls bedding may feature Disney motifs or storybook characters on the pillows.

What are duvet covers filled with?

The duvet is like a fluffy blanket with soft filling. Its often made of a microfiber or a cotton-polyester blend shell with an inside of polyester fill, down, or feathers. Often, theres a stitched design on the outside to keep the filling from shifting and becoming lumpy. Usually, its white, with the color added by the duvet cover. Some people also refer to both pieces as a comforter or coverlet.

Can you get duvet cover sets for California kings?

Yes, duvets and duvet cover sets come in every size, including California King, king, queen, double, and twin. There are also duvet sets for girls and boys bedding and for infant cribs.

Whats the advantage of using a duvet cover set?

Discover the perfect backpack, dorm room decorations, study supplies and great duvet covers and bedding sets to prepare for going Back to College.