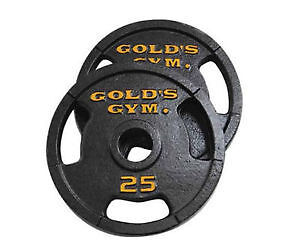 Olympic Weight Plates to Help You Stay in Top Shape

Olympic weight plates are widely used because of their compatibility with standardized workout routines. eBay carries standard Olympic weights that you can be sure will fit on your equipment. Shop from the selection on eBay to find just the set you want.

Olympic weights may give consistent results

Standard Olympic weights help you stay in shape and gain muscle mass. The gradual increases possible with these weights make it so that you can safely and carefully build muscle mass. Widely used for bodybuilding, sports training, or general fitness, Olympic weight plates can be used in a variety of types of workouts, but they are most prized because they provide the needed amount of resistance. They make consistently measured improvement possible.

Are there different sizes of Olympic weights?

There are tons of custom coatings and manufacturing types for Olympic weights. Olympic weighs also come in plastic, sometimes with a metal coating. This material is good for those who find the metal too cold or slippery. Some Olympic weights come in milled iron, but there are also partially milled or lathed iron sets available. Many plates also come with powder coating or other non-slip coatings like rubber.

Vintage plates are fabulous collectors items. Some of the plates are hand-lathed or stamped with vintage lettering, although in some cases the letters are worn off if they were just painted on. You can check out a large collection of plates that can become a collectors item whether they are vintage or special editions, like colored plates. You will want to make sure that the plates match in a set if you are putting a collection together in which matching counts, but you can simply collect single plates as well. There is a large variety of iron types in vintage plates, so browse the selection on eBay to see what strikes your fancy collection-wise.

Content provided for informational purposes only. eBay is not affiliated with or endorsed by Olympic.