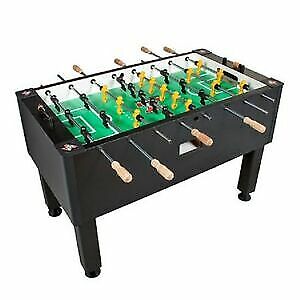 Table football, also called foosball or table soccer, is a table-top game that is based on the theme of association football. The coin-operated foosball table became commonplace in arcades and helped to usher in a home table market that allowed foosball players to play on a table that did not require coins. Since 1971, Tornado has become a name associated with professional league play and the Tornado foosball table and brand has been used in World Championships since 1986.

What are the foosball table design features for a Tornado?

A Tornado brand foosball table consists of a cabinet with a top-opening hinge system. The surfaces come in a variety of colored finishes and a laminate-covered table surface. Each foosball table has eight metal rods that hold a variable number of traditional Tornado style foosball "men" made from solid plastic. Each rod is slotted through the table sides in split bearing designs that provide smooth rod movement during play. Handles made from plastic or wood allow for better foosball control and movement during play. Some foosball table designs offer ramps underneath the table surface to prevent balls from becoming inaccessible during play with one-goalie table rod.

What are the patterns of foosball men on a Tornado?

Each Tornado foosball table uses eight rods mounted through split bearing feeds that hold alternating numbers of Tornado style men. Each player, or players in team play, slide the four rods operated by each side through the split bearing holders to control the ball while it is in play on the table. The pattern of men employed on each row on the table can vary but will be the same number for both sides. Common table patterns on a foosball table side include:

What materials are used for foosball table balls?

Content provided for informational purposes only. eBay is not affiliated with or endorsed by Tornado.